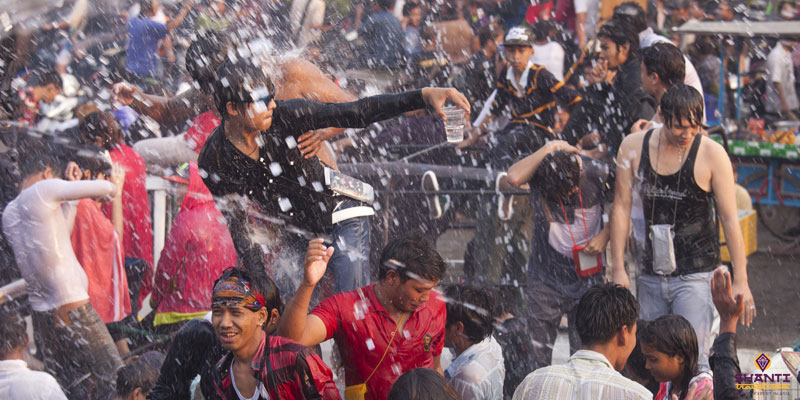 Thingyan water festival aptly comes at the height of summer in Myanmar. The festival is celebrated on the 4 days leading up to the Burmese new year day. It is the only time of the year when the Burmese government allows crowds to gather in public places. The Burmese take full advantage of this opportunity and indulge in festivities on a large scale. Celebrations majorly involve splashing around endless quantities of water. Distinctions between friend and foe, strangers and acquaintances are all forgotten. And that’s perhaps the best part about Thingyan water festival. It brings people closer in an otherwise restrictive, strife-torn country.

During the few days that the Thingyan water festival ensues, no one can walk around the streets in dry clothes. They are sure to get doused by thick jets of water coming from all directions. Status, colour and race are set aside as everyone comes together to celebrate their common culture. For tourists, Thingyan water festival is an especially great time to be in Myanmar. The generally soft-spoken and introverted Burmese people turn into wild, fun-loving extroverts during this time. Alcohol consumption is at its nadir and everyone is yelling out “happy happy” to their neighbour.

Best places to celebrate: Kandawgyi and Inya Lakes in Yangon

Yangon is the best place to enjoy the Thingyan water festival in Myanmar. The most joyous and grand celebrations are held at the Kandawgyi and Inya Lakes. Dozens of temporary water sprinkling stations are erected around the lakes. These also double up as platforms for hundreds of revellers to soak in the water and dance. Loud music blares from huge speakers. On a much bigger platform in the centre, traditional Burmese dances and musical performances are staged. Water is pumped from the lake to fuel what could best be decribed as the biggest shower in the world.

Thingyan water festival also holds great religious and spiritual importance for the Burmese. The Thingyan water is believed to possess the power to rinse all bad luck, sins and evil deeds of the past year. It is considered as a method of cleansing before entering into the new year. There is a mythological legend associated with the festival as well. It is said that Thagyarminn, the king of celestial beings, descends to the earth on the very first day of Thinngyan water festival. He makes a note of how mortals are behaving on the earth. Their good deeds are recorded on a gold parchment while the bad ones on a parchment made of dog skin. The word Thinngyan is derived from a Sanskrit word that denotes change. The descent of Thagyarminn onto earth thus marks the beginning of ‘change’ in Burmese mythology.

Thingyan water festival is also a time for religious reflection by many Burmese. Youngsters pay homage to their elders by offering them presents, washing their hair and cutting their nails. Food prepared in homes is offered to friends and foes alike. People also visit temples to bathe images of Buddha and offer food to monks. Festivities take place mainly during the daylight hours. After sunset, people return home to get a good night’s sleep.

Celebrations resume the following morning with renewed joy and vigour. Although it is nearly impossible to escape all the water slinging, there are other activities to participate in too. Spectators can enjoy traditional performances staged on all 4 days of the Thingyan water festival. Fun fairs and elaborately decorated pavilions called “mandats” are put up in all the streets. Snack stalls everywhere also serve lip-smacking Burmese specialities for people to gorge on.

There isn’t much else to do in Myanmar during Thingyan water festival. It is a public holiday so all the tourist sites are closed. Most of the shops, restaurants and supermarkets also remain shut. Buses will stop running from the 11th to 18th of April this year. They will only ply between Mandalay and Yangon. Train service could also be highly uncertain. So it is advisable to reach your destination in Myanmar a day or two before Thingyan water festival begins. Even if you do manage to find local transport, you’ll be charged double the fares or more. Hardly anyone wants to work during the Thingyan water festival! That serves as a good measure of how important the festival is for the Burmese populace.

The essence of Thingyan water festival is ultimately in the coming together of people. The conviviality and cheerfulness of the Burmese is what lends such a charm to this festival. Beautiful Burmese women can be spotted wearing yellow Padauk blossoms in their hair. Men, soaked to the bone, move around dumping containers of water on anyone in sight. Since there is little to see or do during the festival, tourists can truly revel in the festivities with the locals. It is but important to let go of all touristy inhibitions and participate in the celebrations. Talk to the locals, play water games and dine with them. Learn from the ancient culture of Myanmar and take away some great memories from the Thingyan water festival.

To experience the captivating Thingyan Water Festival, select any of our programs for Myanmar out here http://www.shantitravel.com/en/burma-travel/. We will tailor a joyous Burmese New Year celebration for you!