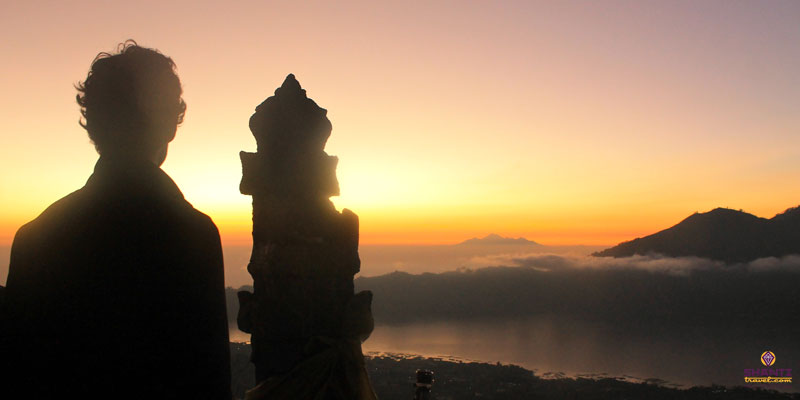 A fresh wind freezes us to the bone. The night is pitch black. The moon is already in its resting place. Above our heads the stars are partially hidden from view by the fog. Before us stands a huge mass of darkness that pierces the clouds: Mount Batur.

Mount Batur Sunrise Trek: The night before the ascent

Alexander, a friend and former colleague, recently came on a trip to Bali. On an adventurous whim, we decided to climb Mount Batur together. A stretch of 70 km separates the south of Bali from the caldera of the Batur volcano.  Perched on our scooters, we traveled the distance the day before. The goal was to find a small guesthouse to spend the short night. Our plan was to embark on the Mount Batur sunrise trek early next morning. Leaving at 3 or 4 am would allow us to enjoy the sunrise at the summit. Mount Batur is a volcano with a double caldera. A caldera is a circular or elliptical volcanic crater, often several kilometres in diameter. The outer Batur caldera is about 14 km across. In the crater is the magnificent Lake Batur, as also hot springs and a few hotels. And within the Mount Batur volcano is another active volcano, rising to over 1700 meters! 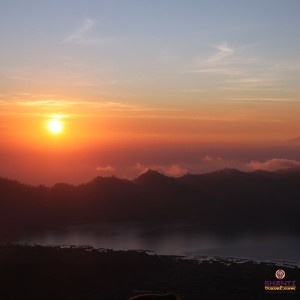 It is now 4:30 am. We are much less enthusiastic than we were yesterday. We met our guide yesterday; he seemed very professional. We are in a group along with 6 other tourists. It is not clear whether they’re from US or New Zealand or some place else. They do have strong accents. It is cold and I’m tired. It is so dark, one can hardly see anything. We’re walking in a single file. The road ahead is illuminated by the flash-lights of other tourists.

“Oh! You don’t have any proper shoes? Only flip flop?”

Ever since I’ve been in Bali I haven’t taken the time to buy sneakers or walking shoes. So it is with shoeless impunity that I’m going to climb the Mount Batur sunrise trek. It is considered dangerous. A not so easy walk, with many rocks falling. I knew this but it didn’t scare me earlier. I’m a good walker, I won’t need equipment – that’s what I thought.

Ten minutes later, I’m fiddling with my scarf and not looking ahead. That’s when I slip on a rock and my foot slinks out of my slipper. It ends its journey on a volcanic stone down the slope. The stones are sharp. The sole of my foot bleeds and my ego takes a solid hit. I dare not look at it. I clench my teeth and continue as if nothing has happened. The climb is just the beginning of my woes on the Mount Batur sunrise trek.

A little further, someone directs the beam of his flash-light right in my eyes, blinding me. I try to deflect, but the beam follows me. “Coke, Coke”, he cries out. It worries me. I try to move ahead but the individual insists. He obstructs my way, waving a red oblong object before my eyes. Suddenly realising what he meant, I smile and politely refuse. I’m not thirsty and don’t like Coca Cola very much.

The climb continues, punctuated by regular breaks. The path is becoming steeper and steeper. Sometimes we walk on black sand, at other times we climb big volcanic rocks. I think of my parents in their sixties. They might still be able to climb this kind of an ascent. However my grandparents probably couldn’t, nor could my 5-year-old cousin. 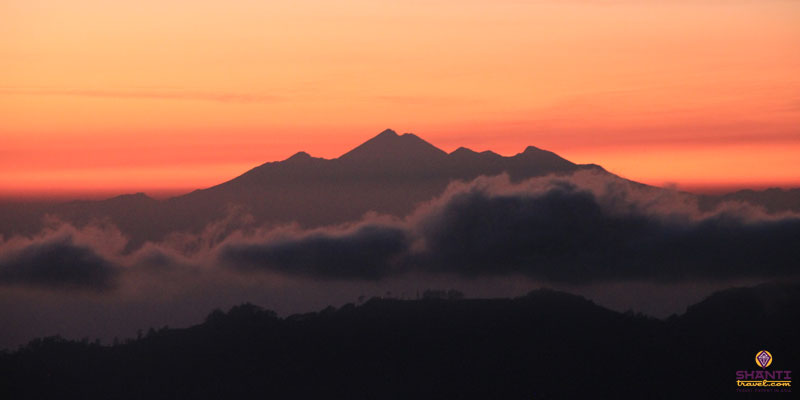 Sunrise at the top of the volcano

The sky has started clearing gradually. It’s almost 6 am. My foot has worsened; the blood has coagulated and sticks to the sole. Only a few more metres to the summit. At the top, there’s a small wooden hut built by the locals. A couple is preparing tea and fried bananas. We are towards the east of the edge of the crater. Fifty, maybe a hundred tourists are already there, devouring breakfast and taking pictures.

So this is how it feels to have completed the Mount Batur sunrise trek! The sky is painted in magical hues – red, purple, blue. Behind large fluffy white clouds the sun rises gently. It is reflected in the sea that can be seen in the distance. Below, the waters of Lake Batur are swaying under the caress of the wind. To the south rises Mount Abang, flanked by the majestic Mount Agung. To the west, Mount Catur Batukaru, its neighbours and then Tapak Pohen. At our feet is the central crater. Around the Batur caldera, it is easy to distinguish solidified black lava in the middle of sparse vegetation. It’s beautiful. It’s awesome. We can feel the earth, alive and vibrating. At the summit of Mount Batur sunrise trek, one can only observe silently and smile.

Discovering the crater in the heart of the volcano 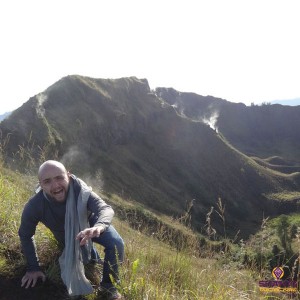 Gradually tourists begin descending. We planned not to go down the same path, but to go around the crater. Our fellow trekkers are becoming increasingly voluble. So we let them go ahead with the two youngest guides. We follow them, walking on the ridge which is sometimes only a few centimetres wide. There’s a steep slope on the right and the crater on the left. Our guide points to a rock from which steam is escaping.

“Look. You can cook eggs and bananas here.”

I extend my hand towards the rock and instantly recoil. It nearly burned. The volcano is still active. Earlier we had observed clouds of steam coming from the inner walls of the crater. I had mistaken them to be mist. Gradually, as we move along the edge, landscapes seem to get richer in colour. They get progressively greater in size and beauty. Arriving on the other side of the crater, we begin the descent. It is faster and more entertaining than the climb. We enjoy sliding on the black sand, ending on our buttocks at the bottom. We finally find our scooters at 9:30 am. The Mount Batur sunrise trek has been a great experience!

Our guide was very helpful throughout and we appreciate his services. I regret any negative preconceptions I had before the trek. They were probably encouraged by fatigue and the sleepy lull of the night. All said and done, Mount Batur sunrise trek in Bali is one activity I highly recommend. Especially if one wants to go on a trek in Indonesia. My foot is a little messed up, but I will survive. I strongly advise climbing Mount Batur wearing proper shoes even normal sneaker will do the trick. Better do as I say, not as I do!

If you want to experience the incredible sight of the Sunrise at Mount Batur than check our program for the adventurous Mount Batur Sunrise Trek over here: http://www.shantitravel.com/en/indonesia-travel/bali-expedition-volcanoes-rice-fields/