Visit Barsana, Vrindavan and Jaipur this March to revel in some of the greatest celebrations of Holi in India. Holi is a major Hindu festival that falls in the Phalgun month of the lunar Hindu calendar. It is a glorious celebration of colours and joie de vivre. Festivities begin on the full moon night with a ceremonial bonfire in which the mythological demoness Holika is said to be burnt. The festivity continues the next morning when people smear each other with dry and wet colours and play with water pistols called ‘pichkaaris’. Song and dance marks the occasion throughout the country. But the most interesting thing about Holi in India is that the customs and rituals have a unique regional flavour to them. Holi celebrations in different parts of the country serve as a glimpse into their local culture and traditions. While making your plans for Holi in India this year, you should definitely not miss out on the festivities in these three incredible Indian cities.

Ready your sticks for the Lathmaar Holi in Barsana

You don’t know what crazy really feels like if you haven’t seen the Holi celebrations in Barsana and Nandgaon villages, some 40 kilometres from Mathura, in Uttar Pradesh. Hindu mythology says that Lord Krishna visited his beloved Radha’s village Barsana, from his own neighbouring village Nandgaon, and teased her friends a few days prior to Holi. He was chased out of the village by women bearing sticks or ‘lathis’. To honour and recreate this tradition, a unique carnival called ‘Lathmaar Holi’ is celebrated here a week before the actual Holi. The women of Barsana spill out into the streets with sticks in hand and beat up the men from Nandgaon village. The celebration is carried out in the compound of the Radha Rani temple in Barsana, which holds the distinction of being the only temple in India to be dedicated to Radha. The same exercise is repeated the next day when Barsana men visit Nandgaon to get playfully beaten up by its women.

Devotional songs and Holi numbers are sung by the revellers, many of whom get high on the bhaang(cannabis)-laced thandai that is always associated with Holi in India. It is also worthwhile to reach Barsana 2 days before Lathmaar Holi to also witness the wacky ‘laddoo holi’ where sweets are thrown around amid much merrymaking.

Feel the essence of Holi in Vrindavan – the land of Krishna

Holi in India marks the end of winter and the start of spring season. Celebrations in the sacred city of Vrindavan, the childhood home of Lord Krishna, are full of fun, frolic and spiritual fervour. It is said that the modern form of Holi, with the water-play and colours, was introduced by Krishna in his time in this very city. Being of a dark complexion, he was jealous of Radha’s fairness. His mother jokingly suggested that he could colour Radha’s colour in whichever hue he liked, and so he did! This is how it became a tradition to colour the face of one’s beloved on Holi in India. Each of the major Krishna temples in Vrindavan celebrates Holi on a different day, so the festivities last for over a week. A particularly spectacular Holi celebration is to be found at the famous Banke-Bihari temple. Holi in Vrindavan has a very intense devotional spirit, with people from across the world coming here to get drenched in coloured water and sing praises of Krishna and Radha. Holi scenes from Krishna’s life are also re-enacted by drama troupes for the visitors’ entertainment. 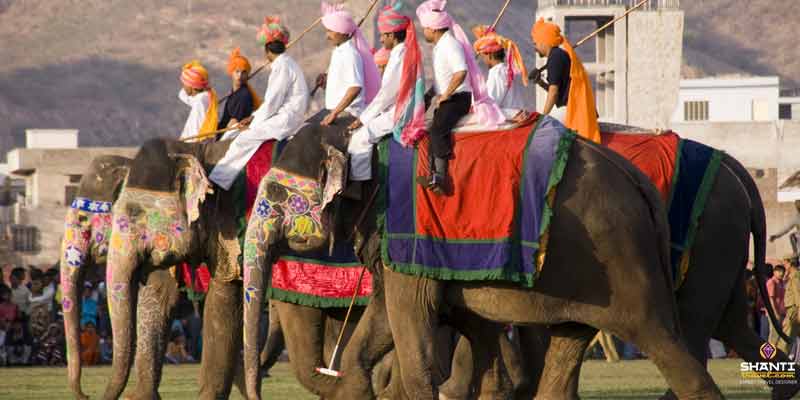 Celebrate Holi with the majestic elephants in Jaipur

Holi celebrations at Jaipur in Rajasthan are a grand affair. The elephant is a true symbol of Rajput royalty and thus forms the centrepiece of festivities in Jaipur. An Elephant Festival is held here every year on the eve of Holi at the Rambagh Polo Grounds. It begins with a procession of elegantly decked up elephants parading down the ramp to applause by a huge audience. Several elephant sports such as polo and tug-of-war were also originally part of the festival, but have been discontinued lately amid global concern about animal rights. Cultural performances and music keep the guests entertained through the evening. Fireworks light up the skies at night. One could also pay a visit to one of the other local celebrations around Jaipur involving elephants, music and dance.

On the morning of Holi, revellers resume celebrations by spraying coloured water and dry colour or ‘gulaal’ on each other. Jaipur perhaps sees some of the most intense Holi action across the nation. People with unrecognizably painted faces and high spirits can be found thronging the streets wherever you look. It is not a place for delicate or light-hearted people to venture into. The merrymaking finally ends with the exchange of small gifts, traditional sweets and warm hugs.

The chaos, madness and unforgettable fun that is Holi

Be it a local or a foreign tourist, everyone is welcome to enjoy Holi in India, and in the true Indian way, no less! You’d always be on the lookout for buckets of water and water jets that might be coming your way from every possible direction. It is advisable to wear such clothes that you won’t mind discarding once the festival of colours has subsided. Organic and herbal colours, a much safer alternative to chemical colours, are also widely available in the markets around Holi for those who have sensitive skin. In any case, a long hot shower and some good scrubbing should be enough to get rid of all the colour and tiredness permeating your body at the end of the day.

The utter chaos and festivity of the whole affair are what set this festival apart from anything you have ever seen before. La Tomatina of Spain might probably be the only other festival in the world that compares with the madness and spirit of Holi in India. Be there this year to be a part of the celebrations yourself.

Take a look at one of our best selling programs for North India, where we can customise your experience of Holi in India.