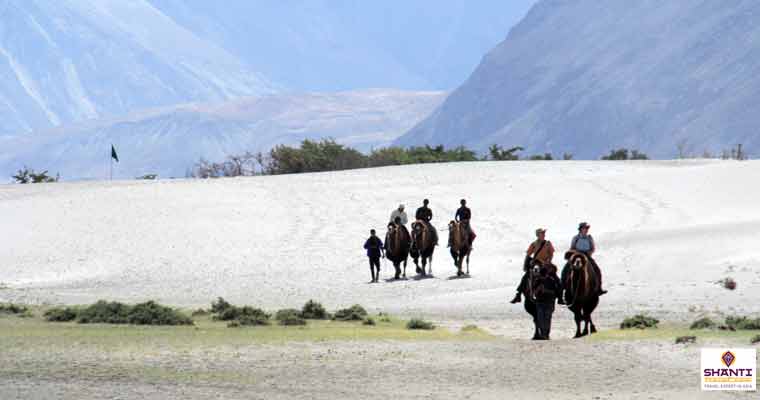 The desert safari in Nubra valley is the latest buzzword with adventure seekers in India. Lying within Leh district in the northern part of Ladakh, Nubra is a tri-armed valley formed by the Shyok and Nubra rivers. At a height of over 10,000 feet above sea level, the valley is a dreamy oasis in the middle of vast mountain slopes and extensive rocky fields. The sandy arid stretch between Diskit and Hunder is where tourists go for a cold desert safari in Nubra.

Getting into Nubra Valley

Visitors can enter and leave the valley via Khardung La, the highest motorable road in India, which remains open all year round. Since the valley lies very close to the Actual Line of Control between India and Pakistan, foreign tourists are required to carry a Protected Area Permit in order to enter Nubra. The requirement of an Inner Line Permit for Indian citizens has however been waived off beginning May 2014. Permits can be obtained from the DC office in Leh town. Diskit is a major town in Nubra that is connected by road to Leh and has all basic facilities to offer. The town also has a popular bazaar and the 600-years old Diskit monastery which houses a beautiful 32-metre high Maitreya Buddha statue.

Ride two-humped camels on a cold desert safari in Nubra

Hunder is a small town lying a few kilometres from Diskit along the Shyok river. Between the two towns is a long stretch of cold desert with silvery sand dunes that change shape with every gust of wind. This trail is well known for a small population of double-humped or Bactrian camels which has apparently descended from the animals that historically plied on the Central Asian trade routes. Visitors make it a point to stop by at Hunder to mount one of these shaggy creatures and marvel at the surrounding colourful landscape and snow-clad peaks. In the neighbourhood one can also spot thick forests of seabuckthorn, also natively called ‘Leh Berry’.

Other attractions in the picturesque Nubra Valley

The region beyond Hunder is greener and more scenic owing to its lower altitude. Further down the valley is the village of Turtuk, which was opened up to tourism only in 2010 and thus remains untouched by outside influence. It is a peaceful little hamlet populated by countless apricot trees and the Balti tribesmen, who speak in an unwritten language. Adventure lovers can set up an overnight camp in Turtuk or Hunder and lie gazing at the millions of stars that light up the sky at night. Panamik village is the last stop to which tourists are allowed access in the valley. It is famous for its curative hot springs that are high on sulphur. The village is also a popular stopover on the trekking trail that leads up to Ensa Gompa, perched precariously on top of a huge rock.

Visit between May and September for the best experience

The best time to go for a desert safari in Nubra is between May and September, when the weather is pleasantly cold and a host of fully functional accommodation options are available. Towards the end of this period, the colours in and around the valley are simply magical. Clouds lingering and creating shadows over the mountains are a real treat for the eyes. Though fewer guest houses and hotels stay open after September, it is a good time to visit if you’re looking for home-stays and cheaper deals on accommodation.

Why don’t you virtually transport yourself? Watch our video about Nubra Valley and prepare yourself for the incredible experience.

It is always better to set out from Leh with a full tank and adequate cash supply because you probably won’t find a gas station or an ATM anywhere on your desert safari in Nubra. The camel mounting spot is near the army base camp, a little under 3 kilometres from Old Hunder. Tourist groups set out on the 3-hour safari, twice everyday at 9 am and 3 pm. It is advisable to carry lots of water and to check up on the weather forecast for the day in order to dress up accordingly. The cold desert safari in Nubra valley is a fascinating experience and is bound to make for some fond memories. Make sure to keep aside a 2-3 night overlay at Nubra the next time you plan a visit to Leh-Ladakh.

To get the real dose of adventure at the cold desert safari in Nubra Valley check our program http://www.shantitravel.com/en/indian-himalayas/ladakh-trekking/between-heaven-earth/ and we will assure you an extraordinary experience.