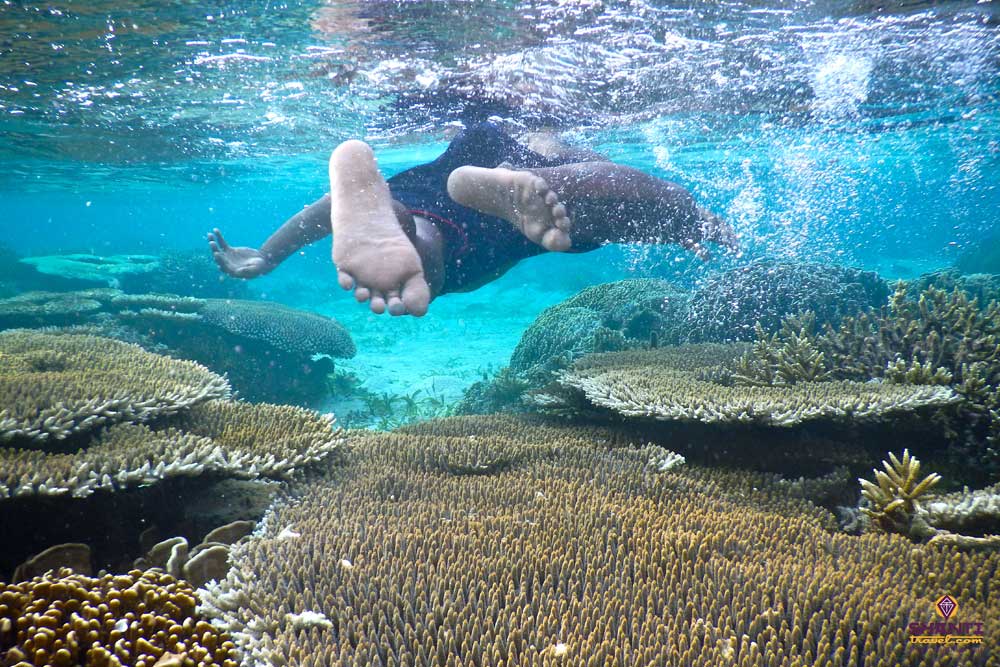 Choosing the top five spots for scuba diving in Indonesia is like having to choose between your body organs. Each one is special in its own right! Indonesia is widely recognized as having the best marine life in the world. It lies at the confluence of the Indian Ocean, Pacific Ocean and the South China Sea. The resulting nutrient-rich waters are perfect for harbouring great biodiversity and an unfathomable variety of rare species.

Indonesia is home to over 3000 species of fish, as compared to the 1500 in the Great Barrier Reef and a mere 600 in the Red Sea. It also has 20% of the world’s corals including over 600 different species. Just throw in some deep sea trenches, World War II wrecks and an exciting ocean floor, and you have the wondrous Indonesia! Here is a lowdown on the five best spots for scuba diving in Indonesia, not to mention the lesser known ones that go along with them too. 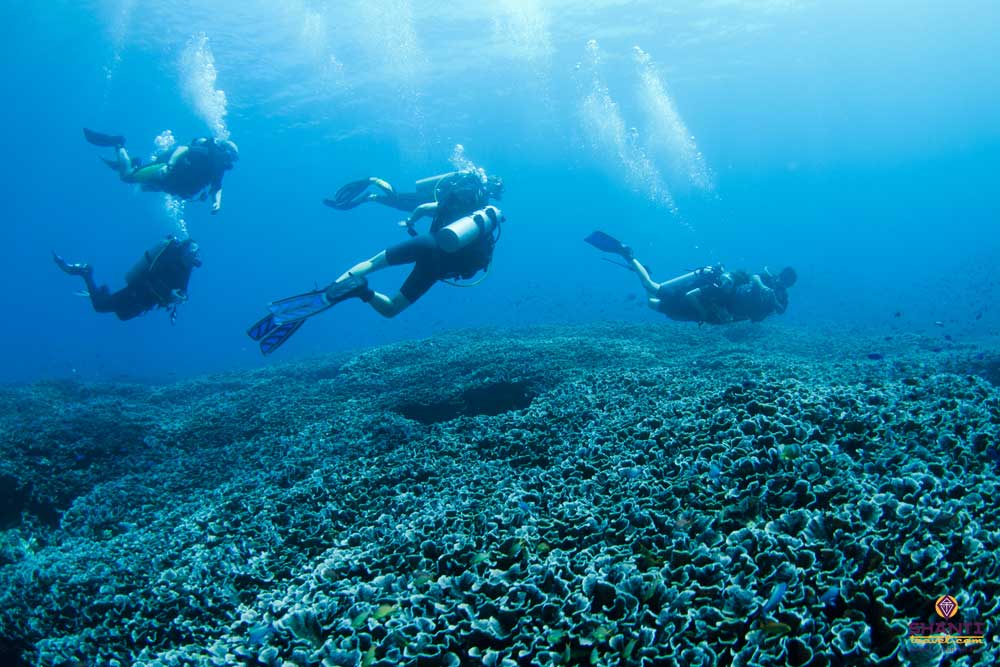 Located in West Papua, Raja Ampat is itself an archipelago of 1500 small islands. The name Raja Ampat means “the four kings”, referring to its four biggest islands – Misool, Waigeo, Salawati and Batanta. The marine biodiversity found in the Raja Ampat area is the highest recorded anywhere on Earth.  The archipelago also contains Cenderawasih Bay, the largest marine national park and one of the five best spots for scuba diving in Indonesia. There are a staggering 1508 species of fish, 537 of coral (75% of the entire world’s coral species) and about 700 species of molluscs to be found here. The huge colonies of corals in Raja Ampat have lead scientists to believe they are more resistant to threats. Remote and relatively untouched, very few boats or tourists venture out to Raja Ampat islands. Their pristine location makes them great for diving and underwater photography. It is best to explore this site via Liveaboard cruise.

Bunaken is a small island, part of the Bunaken marine national park. It’s located at the northern tip of Sulawesi island. The park is 3% terrestrial and the remaining marine. The waters in the area are as deep as 1600 metres. This makes for an unbelievable wall diving experience, and one of the best in the world. The special thing about Bunaken is that you can spot both big and incredibly small marine species here. On the one hand you’ll swim among schools of Manta rays, eagle rays, blacktip reef sharks and the occasional lone turtle. On the other hand, there will be plenty of shrimps, coral reefs, rare crab species and nudibranchs to see. There are also as many as 30 diving sites! They will make sure you never get bored of diving in Bunaken, one of the top 5 sites for scuba diving in Indonesia. 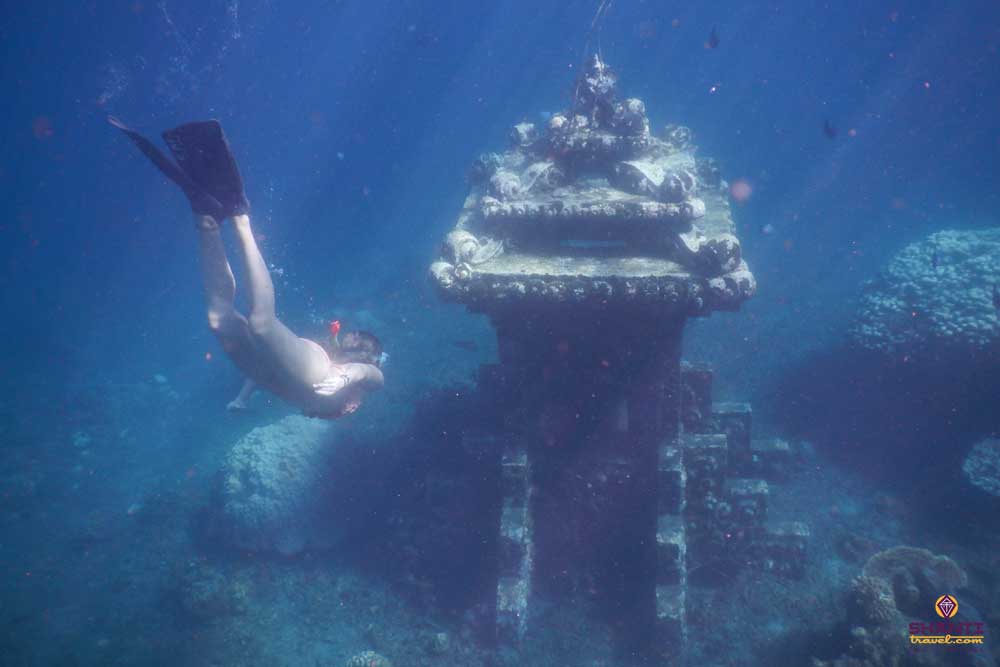 Menjangan is a small island a few kilometres to the north-west of Bali. It is a great spot for wall diving down to 60 metres depth. The walls are encrusted with stunning sponges, gorgonian sea fans and caverns for divers to explore. Up until a few years ago Menjangan was also famous for its beautiful flat reef corals. But due to bleaching and harmful fishing practices such as bombing, it is no longer the case. It has become increasingly difficult to spot live, healthy corals and small marine life in the area. But steps have been taken to counter the problem and regain Menjangan’s status as one of the top 5 scuba diving spots in Indonesia. The area is especially good for beginners because currents are light and visibility is good. Anker Wreck, a 150-year-old wooden boat lying 40 metres deep, is also a great site for diving around Menjangan.

Scuba diving at Komodo islands is all about live action! The area is best explored on liveaboard cruises. Several big sharks roam around the dive sites, including the grey, blacktip, whitetip and even the hammerhead shark. Several schools of pelagic fish also swim about. The rainy season between December and February is the best time to dive off Komodo island. Why, because it’s Manta season! You will spot the beautiful and peaceful manta ray dancing in the waters at this time. In general the best diving conditions are found from March to October. The sites where big fishes roam are also known for stronger currents, fit for somewhat experienced divers. Quieter diving spots are also available for the beginners. But the big fish action is what makes Komodo one of the top 5 spots for scuba diving in Indonesia. 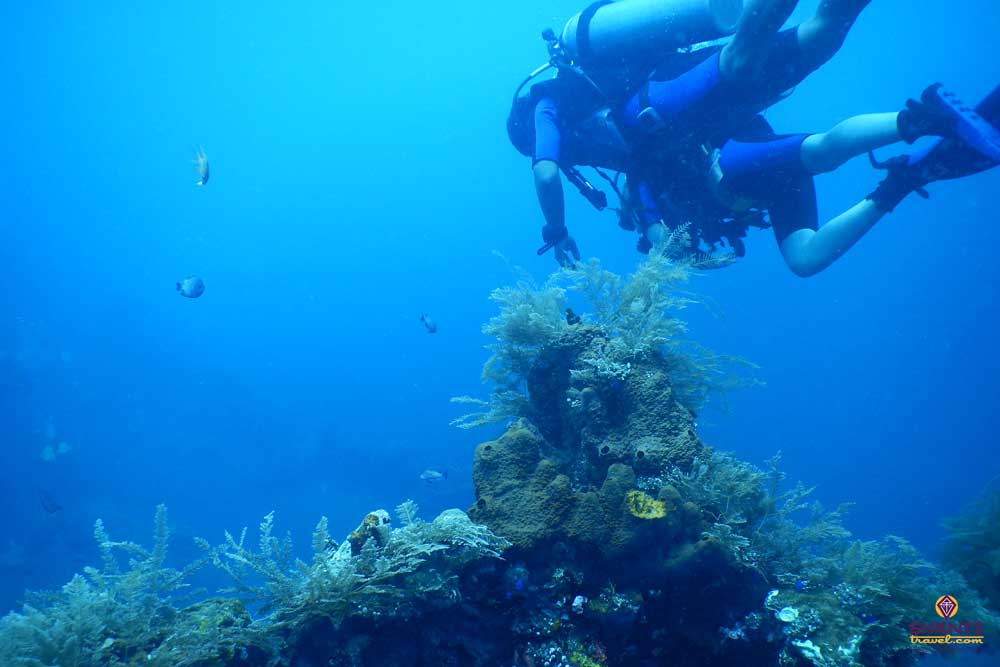 Tulamben is the best place in Indonesia for shipwreck diving! This small village is located on the north-east coast of Bali. Its name comes from a word that roughly translates as “many stones”. This refers to the destructive impact of the Mount Agung eruptions on the Balinese landscape. Indeed, the Tulamben beach is made not of sand but large smooth stones. In 1942, during the second world war, a Japanese torpedo wrecked the US Army ship, Liberty. It presently lies a short swim away from the shore in 30 metres of water. It is an easy diving experience and a great place for beginners to learn free diving. No wonder it makes the cut for the top 5 spots for scuba diving in Indonesia. Beautiful multi-coloured corals and other marine life can be spotted on the wreck itself. Sightings of whale sharks, Mola Mola, barracudas and the rare pygmy seahorse are common too. A night dive on the wreck is especially recommended. This could even be followed by an early morning dive before the day-trippers start arriving! 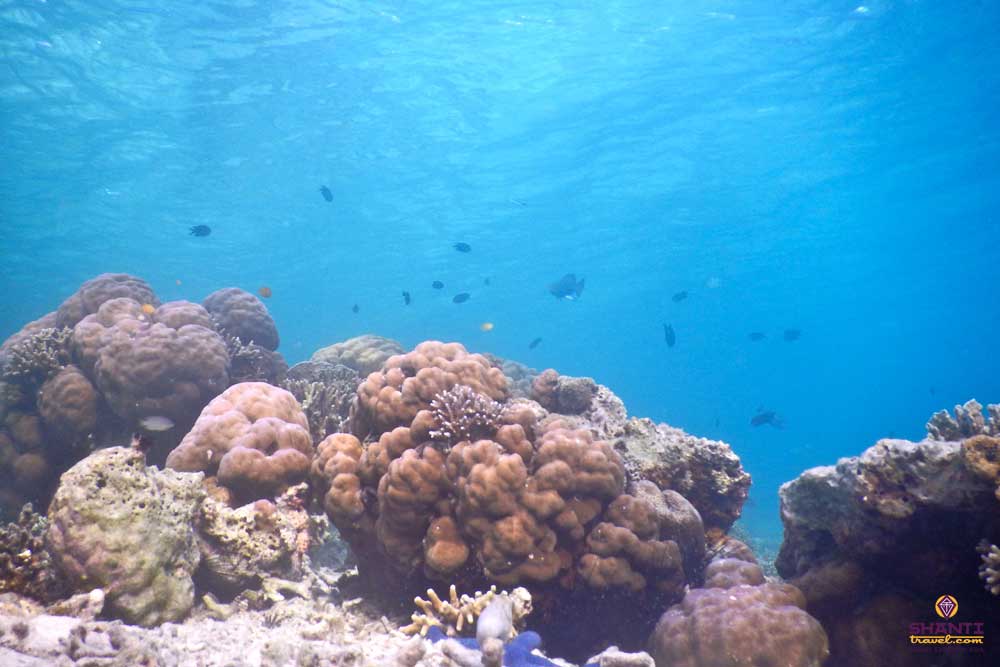 Indonesia enjoys the status of being the best destination worldwide for diving enthusiasts. The archipelago has something to offer divers of all levels. You can come here for your first diving experience or in search of challenging dives in strong currents. The white sandy beaches and happening night-life along with the top five spots for scuba diving in Indonesia make the country a favourite travel destination.

To dive deep into the beautiful marine life of Indonesia check our program for scuba diving in Indonesia http://www.shantitravel.com/en/indonesia-travel/diving-trip-in-indonesia/