Shanti Travel > Off to the land of mountains and snow: Darjeeling Gangtok Tour

A Darjeeling Gangtok tour is just what the doctor would prescribe to those who want to break away from the maddening crowds and fast pace of city life. Separated only by a three hour drive, Darjeeling in West Bengal and Gangtok in Sikkim together form an ideal destination for a prolonged retreat into the blissful Himalayas.

A hill station in the northernmost part of West Bengal, Darjeeling is renowned for its sprawling tea plantations from where all kinds of tea are exported to the farthest reaches of the globe. It is one place you can visit almost throughout the year to be met by pleasant weather.  July and August could be avoided for it there is extreme rainfall during these months.

To kick off your Darjeeling Gangtok tour, you could take a flight to Bagdogra airport and drive down to the Glenburn Tea Estate some 40 kilometres away. The ride is known to be a little bumpy but offers enchanting views of the hilly countryside. The tea estate, in the midst of lofty mountains, provides a magical glimpse of the ways of life as would have been experienced by its British colonial occupants some 100 years ago. Hike into the surrounding wilderness, pack a picnic basket and go fishing, indulge in a relaxing spa session and enjoy a beautiful candle-lit dinner by the river. Not to forget, buy loads of tea to take back home.

Of sunrises and joy rides

While in Darjeeling town, you should wake up at 4 am and trek up to the Tiger Hill to experience a truly mesmerizing sunrise. Darjeeling’s highest point, the hill also gives you a bird’s eye view of the mighty snow-clad Kanchenjunga Mountains. Later you could hop on to the Toy Train from Darjeeling to Ghoom, the second highest railway station in the country. Here you must pay a visit to the revered Ghoom Buddhist Monastery, that houses a towering 15-feet statue of Maitreya Buddha or ‘The Buddha to Come’, along with some rare handwritten Buddhist scrolls. 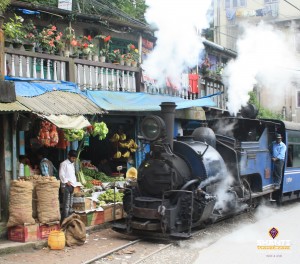 The Toy Train is part of the Darjeeling Himalayan Railway, a UNESCO World Heritage site; the 8-kilometre stretch between Darjeeling and Ghoom loops through splendid wooded hills that make for great photo ops. On your way back, you could also drop by the Japanese Peace Pagoda on the Jalaphar Hill and shop for local handicrafts and miscellaneous knick-knacks at Batasia Loop.

Sikkim, the land of the Mystical

With its lush green valleys, clear glacial lakes, treacherous snow-covered mountains and high passes, Sikkim is heaven incarnate for both the traveller and the nature lover. It is also a Buddhist center of learning and spirituality. The state’s capital city, Gangtok would be the second destination on your Darjeeling Gangtok tour. The best sights can be seen in Sikkim during April-May and September-November.

Wake up at the crack of dawn and soak in the warm rays of the sun rising from the mountains’ midst. The adventure seekers can thereafter hire a local taxi, obtain a permit from Gangtok police authorities and drive to Nathu La, the highest pass on the Indo-China Border. It is a 4 hour drive along narrow winding roads with extensive landscapes of mud and snow in the backdrop. Two hours into the journey, you can stop over at Tsomgo (or Changu) Lake for a cup of tea and a Yak ride. On a cold wintry day, the lake can often be found half-frozen, a wonderful sight in itself.

The drive up to the pass is rough and freezing temperatures will greet you. At a mind-numbing height of 15,000 feet, the pass gives a panoramic view of Mount Kanchenjunga, the third highest peak in the world, and its surrounding mountains. On a clear day you can catch a glimpse of various peaks on the other side of the border as well as Chumbi Valley at the intersection of India, China and Bhutan. It is advisable to cover up properly to counter the cold and to carry along a pair of binoculars and good shoes. Make sure to start at dawn and return early, for the sun rises and sets early in the North East and driving on mountain roads after sunset could well be a death invitation. Another glacial lake worth visiting is the Gurudongmar Lake at 17,800 feet. Its emerald waters are considered sacred by both Hindus and Buddhists.

Spiritual and Cultural Heritage of Sikkim

While you will encounter a host of Buddhist monasteries throughout your Darjeeling Gangtok tour, the Rumtek Monastery would unarguably be the largest and most famed of all. 24 kilometers east of Gangtok, it houses several sacred Buddhist relics, the most magnificent being the Golden Stupa. Two important festivals are held here every year during the summer and winter, involving traditional Tibetan Lama dance performances which are a treat to behold.

To visit this serene Himalayan region nestled in the Northeastern region of India, a tailor-made Darjeeling Gangtok tour is all you need. Check our program http://www.shantitravel.com/en/indian-himalayas/sikkim-trekking/sikkim-and-the-hill-stations-of-west-bengal/ touching tea plantations, mountains & monasteries.