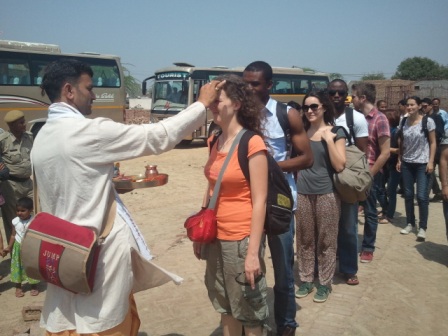 It happens once or twice a year that the Shanti Travel family sets off on a full weekend incentive (a weekend designed to strengthen teams and introduce new projects of the year). This year, it was a real challenge to drive nearly 60 people out of New Delhi. A teaser was launched several weeks in advance to motivate participants: tour leaders to travel designers, no body could miss the call!

The destination was kept a secret until the last minute and although speculations were rife, arriving in a beautiful farmhouse a few hours from New Delhi was a real surprise. This farm property is located in Haryana, just outside a small village on the edge of a lake in the middle of farm land. We were greeted by curious yet friendly looks, and the hosts as well as many village people came to join the welcoming ceremony. Our host applied tikka on our foreheads, a symbol of the beautiful colors of India. 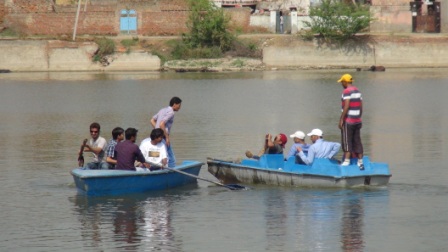 We discovered a little bit more about this very original farm, with its bright orange walls accented with white. The women were allotted bedrooms to be shared by two or three, while the men occupied large tents planted outside, offering a cozy space with two thick futons and a shower fitted in each. Throughout the weekend, the hosts and villagers allowed us to experience the surroundings. We lacked nothing and they were always ready with a smile to make any service available to us.

The day had just begun. Kunwar, the host, takes things into his own hands, and divides the whole group into 3 teams. With energy worthy of the greatest coaches, he challenges us to a big bike race around the village. The people on the road cannot hide their smiles and they encouraged us all, easing the physical pain of cycling, a tad bit! Amid the cornfields, we enjoyed beautiful sights and fresh air, all just a few hundred kilometers from the Indian capital. 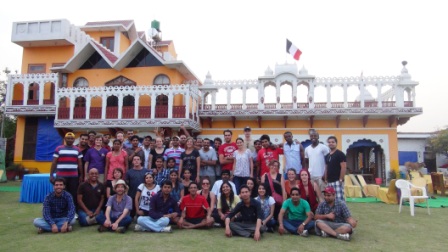 Tractors, boats, and other farm activities

If we were masters of our movements on our bicycles, we were now shaken in all directions on the farm tractors that led us to the middle of the farmland. Not surprisingly, the most seasoned participants were the Shanti Travel women: like real professionals, they each took turns over the steering wheel and pedals. A boat ride on the lake gave the men the opportunity to prove themselves. By the second part of the afternoon, some people were huddled in corners discussing the day; some were chasing geese, while some were trying to milk cows! Aah, the charms of life on the farm!

What followed then was a game for the whole team to discover some secrets about each other. This joyful atmosphere extended to the early evening, while presentations about last year’s balance sheet were being made. The talents of all those who contributed to the year’s success were lauded, while a wave of excitement rippled through with the announcement of new projects for the coming months. These new opportunities include the opening of an office in Bali, and new destinations in Burma and Indonesia. Everyone at Shanti Travel shares the same passion – travelling and the desire to share this passion.

The day ends with the much awaited party. Well known for their dancing skills, Indians are the first on the dance floor. It does not take much time for all sixty people present to shoot their hands into the air, bouncing to the rhythm of sounds – whether Indian, French Quebec, German or Dutch – representing the different nationalities present in the team. We laughed, danced, drank and were happy to discover each other, far away from professional conventions.

Back to New Delhi

We woke up the next day, with maybe a few under eye dark circles, reflecting the evening’s festivities. We left this amazing farm, won over by its simple and peaceful atmosphere. Before boarding the bus we thank our hosts and the various village people, who have still not let go of their smiles. We drive off to Delhi, leaving the beautiful Haryana village behind, with happy memories and recharged batteries.