Jaipur is a city of heritage, culture, and colours. The capital of the majestic state of Rajasthan, it is a delightful concoction of metropolitan and old-world charm. The land of Rajasthan, literally translating to the ‘Land of Kings’ has a royal history as it was under the rule of the Rajputs, one of the fiercest, chivalrous and regal lords of all time. Their patriotism was so legendary, that even the Mughals and the British held them in high regard. It is the rule of this dynasty that has shaped the contours and lands of Rajasthan. Regal palaces, towering and imposing forts, and majestic lakes originally built as reservoirs – these are just some of the gifts that the erstwhile rulers have left behind.

Jaipur is home to many historical monuments, each of them telling a story of glory, victory or even defeat.  A visit to Jaipur will definitely be incomplete without a visit to each of these impressive memorabilia of the past.

The City Palace is a vast palace complex located in the old part of the city of Jaipur. It is an architectural delight, combining elements of Rajput, Mughal and British architecture. This 18th century monument was given many extensions over the years, and today it stands in all its glory. The monument is a compound, as it also includes palaces such as the Chandra Mahal, and other buildings, courtyards and gardens. It houses many museums, each exhibiting textiles, royal clothing, manuscripts and many other fineries.

Another palace in Jaipur built in the 18th century is the Hawa Mahal, or the ‘Palace of Winds’. Located in the busy business centre of Jaipur, it has one of the most recognizable facades in the city. Small windows built next to and above each other for five stories are emblematic of a beehive. Each window has latticework around it, making the overall façade of the building quite unique. Built in pink sandstone, the distinct architecture of the monument allows cool air to air condition the palace, thus lending it its name. 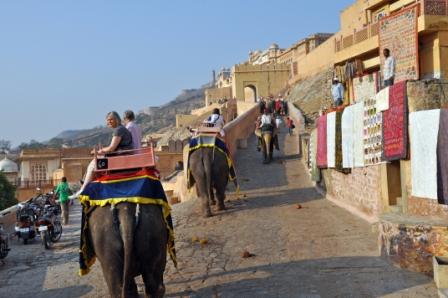 The Amber or Amer Fort greets travelers as soon as they are about to enter Jaipur. Situated atop a hill, this formidable fort is sprawled across several kilometers on the hill, overlooking a lake. The fort houses many rooms, courtyards, passages and palaces, and is one of the most prominent attractions of Jaipur. The narrow road leading to the fort inspires visions of royalty and secrets. A popular way for many tourists to go up the long winding path to the entrance of the fort is on the back of an adorned elephant.

Nahargarh Fort is another fort located on the edge of the Aravalli hills. This fort overlooks the city of Jaipur and is known to have one of the best panoramic views of the city, especially at night. Also built in the 1700s, the fort contains many courtyards and rooms and showcases some intricate frescoes.

Sitting atop the Aravalli hills, even above the Amer fort, is the Jaigarh fort. It offers a panorama of the Amer Fort and the Maota Lake. The fort was originally built to protect the Amer Fort and is built in a similar fashion. Sprawling across 3 kms in length, it also houses a large cannon, which at the time of its construction was the largest cannon on wheels in the world.

To visit the historical monuments, palaces, forts and lakes of Rajasthan, visit our website.