Shanti Travel > Shanti and its travels 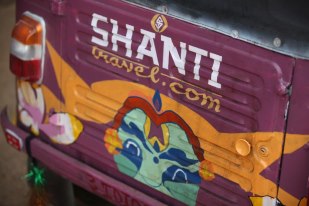 Shanti Travel loves to make people travel and experience the wondrous joys of wanderlust. Recently, Shanti Travel had sponsored Nicky for a rickshaw race, which we lovingly named Shanti, which took her through 6 states and an Union territory. Read on about her fascinating journey…

And we have done it!!!! 2917 Kms, 12 days, 98 hours of driving a rattling tin box, 50 cups of tea, 30 coconuts and a 130 liters of Petrol later… We are in Fort Kochi at the finish line. From where we started in Jaisalmer to where we are now, it is indeed a very long way and it has been an unforgettable drive in every possible way. From the arid desert landscape of Rajasthan to the backwaters of Kerala – we have seen the scenery change in slow motion (Shanti – our Tuk Tuk wasn’t very fast you know). The remoteness of Barmer, the industrialised towns of Gujarat, the Western Ghats in Maharashtra, the green fields and forests of Karnataka, the beaches of Goa and Daman, the abundant river system in Kerala… Incredible India indeed! We ended up seeing India with a whole new perspective and at just the right speed. This unique and I must add bizarre journey – took us through 6 states and 1 union territory in what is actually a glorified lawn mower!!! But what is even more startling is that we went almost 3,000 KM without a single breakdown (yes we lost one silencer but that’s hardly a breakdown). Not even a flat tire and compared to what some other teams went through – I think that was an achievement in itself. So hats off to Shanti… The real star!!! Shanti also happened to be among the best pimped Rickshaws among 80 teams and the credit for that goes to Fiza Khan for the brilliant design. We were mobbed literally everywhere we went and almost everyone was really helpful except this one guy in Pune – Nicky asked him where Sayaji hotel was… He replies “too far” and walks off which I thought was really funny!!! We were actually pulled over on the highway at times by people wanting to take pictures… It has been a truly amazing ride.

For our final assault on Fort Kochi – we started at 7AM (earliest start) from Bekal Fort along the weirdest highway system I have ever seen!!! You are cruising along NH17 and suddenly you are on a 10 feet wide road and it still says NH17 and then it becomes even tighter and it becomes a state highway… After 17 right turns the narrow lane again becomes a National Highway – unbelievable!!! Probably the hottest day of the entire trip and no infrastructures along the way and crazy traffic mostly meant that the final drive was the toughest. We drove 15 hours and broke our daily record to clock 400Kms!!! We drove into the beautiful Fort Kochi at 10PM half expecting crowds shouting slogans and garlands and everything else that goes with it but obviously there was not a soul in sight and sadly we were not the first team across the finish line – we were the fifth!!! You see it was not just a race. For us the adage – It’s about the journey and not just the destination – was true. We had taken a two day break in the middle so we weren’t that disappointed. We went back again through the finish line in the morning for a slightly more grand welcome.

Another unique feature of this adventure has been raising money for charity – though we don’t know what all the teams put together rose. A team by the name 3 Idiots managed to raise about 1200 Pounds for two fabulous charities – Smile Train and Frank Water. Smile Train carries out corrective cleft lip surgeries in developing countries while Frank Water works towards provide clean drinking water in mainly rural areas. And would we do it again? Yes, in a heartbeat!