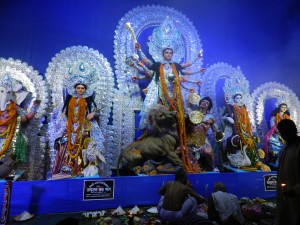 In October, the Durga Puja festival, one of the biggest festivals in India, is celebrated nationwide. Families and friends come together to celebrate the victory of the goddess Durga against the devil Mahishashura, or the victory of good over evil. It is a great moment of reflection and celebration, particularly celebrated in Kolkata in the state of West Bengal.

Calcutta, the city of joy 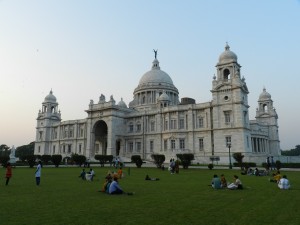 I travelled to Calcutta during the famous festival to attend the celebration of this religious event. During the 10 days of celebration, the city is not the same as it is year round. Organization and management prevails on the streets, so that the festival runs smoothly. These conditions are ideal for getting around on foot or by car.

Calcutta is a captivating city that exudes charm and authenticity that are not necessarily found in other major cities of India. This city should definitely be discovered during the festivities of Durga Puja. 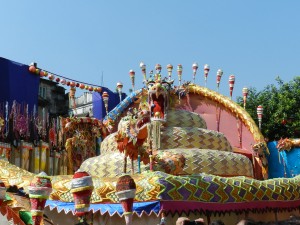 Every year, on the occasion of Durga Puja, each neighborhood committee collects money from community members or sponsors. With the raised funds, the committees utilize artists and workers to create and build ephemeral temples, commonly known as pandals, in which the various ceremonies of the festival take place. The size of the pandals and the materials used vary according to the amount of money collected.

For those who visit Calcutta before the actual festivities, it is interesting to visit the areas where the idols are created. The intricate process is fascinating.

The pandals, real works of art 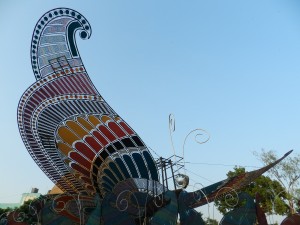 Visiting the pandals was a real surprise and the most intense part of the trip. True works of art, these structures, which are erected for the ten -day festival may require up to six months of construction.

Each pandal is built on a theme of its own: dragon-shaped or a butterfly in flight, the head of a Buddha created from kitchen utensils, a rickshaw back to symbolize the end of a way of ancestral transportation, pearl garlands or boats … the list is long because the city has thousands of pandals every year.

As any city dweller, I followed the local custom of visiting pandals, which is mainly in the late afternoon and for some people until the end of the night. Apart from family celebrations, one of the main activities during the few days of the festival is pandal hopping. Backpacking from pandal to pandal, the inhabitants of Calcutta sometimes queue for more than half an hour to visit the most impressive pandals. 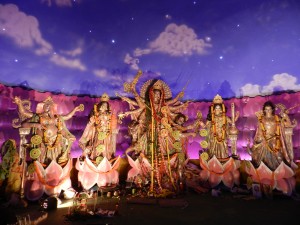 Barriers are installed outside each pangal to control the crowds and ensure the smooth running of the visits. Once inside, the transition occurs rapidly in order to make room for others. However, each person takes the time to stop before the altar that welcomes worshiped idols: – Goddess Durga in the middle, with her mounted lion overlooking the demon Mahishashura she defeated.

– Ganesh the god of wisdom, known for his elephant head,

– Laxmi the goddess of prosperity and pleasure,

– Kama, the goddess of love

– And Krishna, one of the avatars of Vishnu, the creator of the world.

Each pandal is a testament to the creativity and inventiveness of its designer.

Throughout the day, various pujas are celebrated to mark the highlights of the story of the goddess Durga and her victory against evil. Each pandal is overseen by priests, called pundits in Hindi, to conduct ceremonies, and to offer prayers and candles. These prayers are the moments during which we fully feel the fervor and devotion of the people.

Immersion in the Ganges 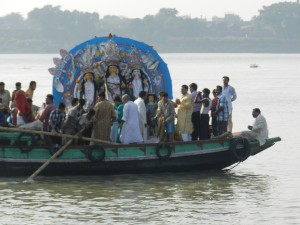 On the last day of the festival, the idol of the goddess Durga is dismantled from the pandal to be brought to the River Ganges. At the culmination of a grand ceremony, the goddess’ idol is immersed into the Ganges. Larger idols are loaded onto a boat and taken away from the bank to be immersed into the depths of the river. A beautiful homage to this victorious goddess of evil, even if we should be skeptical about its hazardous impact on the environment.

A beautiful as well as artistic religious festival, this is a real experience of authentic and traditional India. If you do not know Calcutta, this is a good opportunity to go there and enjoy a unique cultural journey.

Start thinking about your trip Durga Puja 2013 by visiting our website www.shantitravel.com/en.