Shanti Travel > Navratri Celebration in Gujarat – A Festival of Ecstasy

An amazing journey to Gujarat starts with its famous festival of Navaratri (translates to nine nights) that goes on for nine nights. The festival is celebrated all over India but is particularly famous in Gujurat, where it is also the main festival. The significance of this festival is that it worships the goddess Durga (also called Ambaji). There are many terms that are synonymous with this festival. Dandiya is a dance form that is performed using wooden sticks, while Ras Garba is performed to worship Lord Krishna rather than Goddess Durga. The festival of Navratri starts from the first day of the bright fortnight of the Hindu Month of Ashwin.

The origins of the festival

The word Garbo or Garba originated from the Sanskrit word “Garbhdeep”- an earthen pot with circular holes. The earthen pot is a symbol of the human body and the lamp lit inside signifies the divine soul. The nine-night festival is celebrated in three parts. The first part worships Goddess Durga to destroy evil and give power to fight with all problems. The second part reveres Goddess Saraswati for wisdom and art. The last and third part is for Goddess Lakshmi to bestow prosperity, celebrated just after monsoon which is a good time for harvests.The 10th day is celebrated as Dushera (Vijayadashmi), which is also a very famous festival of India. 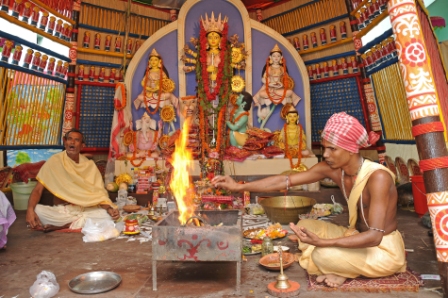 Just after the puja begins, the music starts and the people who are familiar with the dance style start dancing. I was not familiar with the dance styles but slowly started dancing with a decent rhythm. The traditional way of dancing is simple but people have invented some complex dance styles which were too difficult for me to follow! It was a good experience to visit Gujarat during this season. Every day people donned new traditional dresses and ornaments, sometimes giving the impression of a Fashion Week! The traditional music composed of drums and religious songs. But nowadays modern instruments and live bands are

Unlike North Indian culture where the male is the dominant gender, in this part of the world it was totally opposite. This is a time for women to be out of their houses and whirling, uninhibited, towards the divinity that hides within her own body. They get out for the festival at nights and are completely safe. We had an awesome trip to Gujarat, full of fun, dance, music, culture, heritage and religious aspects and I would love to go again.

Shanti Travel designs customized trips for fair and festivals in India and other countries in South Asia. Contact us today to get a free quote!