Shanti Travel > Tourist places near Chennai that are worth visiting 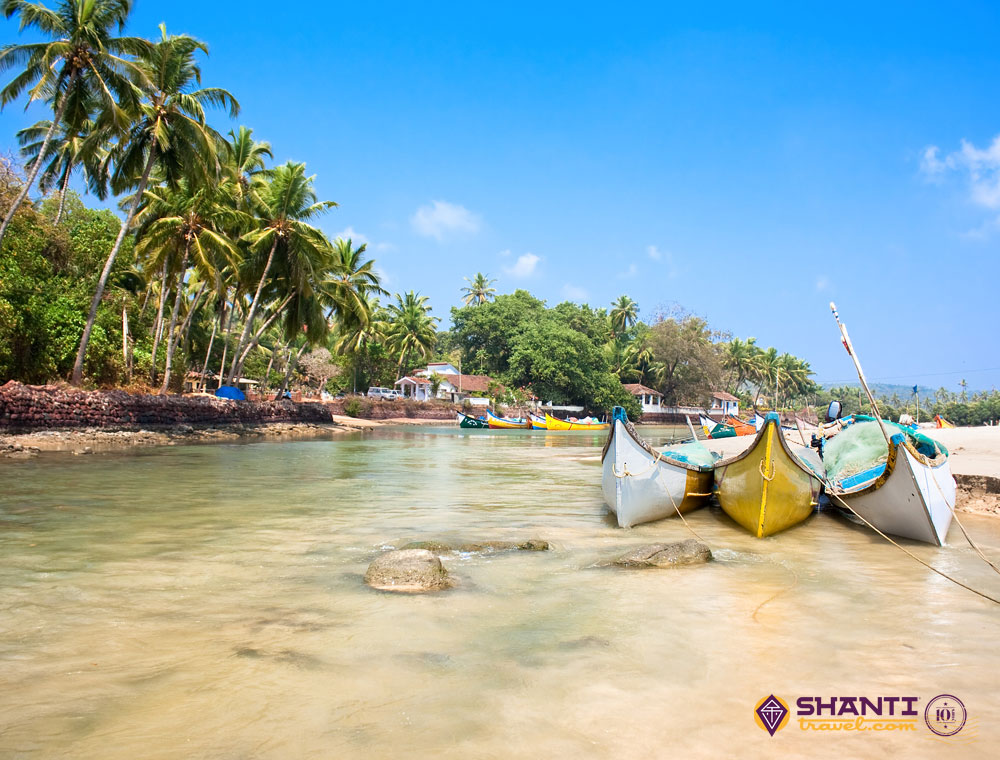 There are several tourist places near Chennai that are absolutely worth visiting for their stunning beauty and cultural richness. Chennai, or erstwhile Madras, is the capital of Tamil Nadu and its biggest metropolitan city. A tropical paradise, Chennai can get sweltering hot in the summers but remains pleasant throughout February-March and September-December. Lonely Planet has named Chennai as one of the top ten places in the world to be visited in 2015, while BBC has called it one of the hottest cities to live in this year. There is no dearth of tourist places near Chennai, from hill stations and beach paradises to temple cities and lake towns. Check out our list of six places near Chennai that are worth a visit. 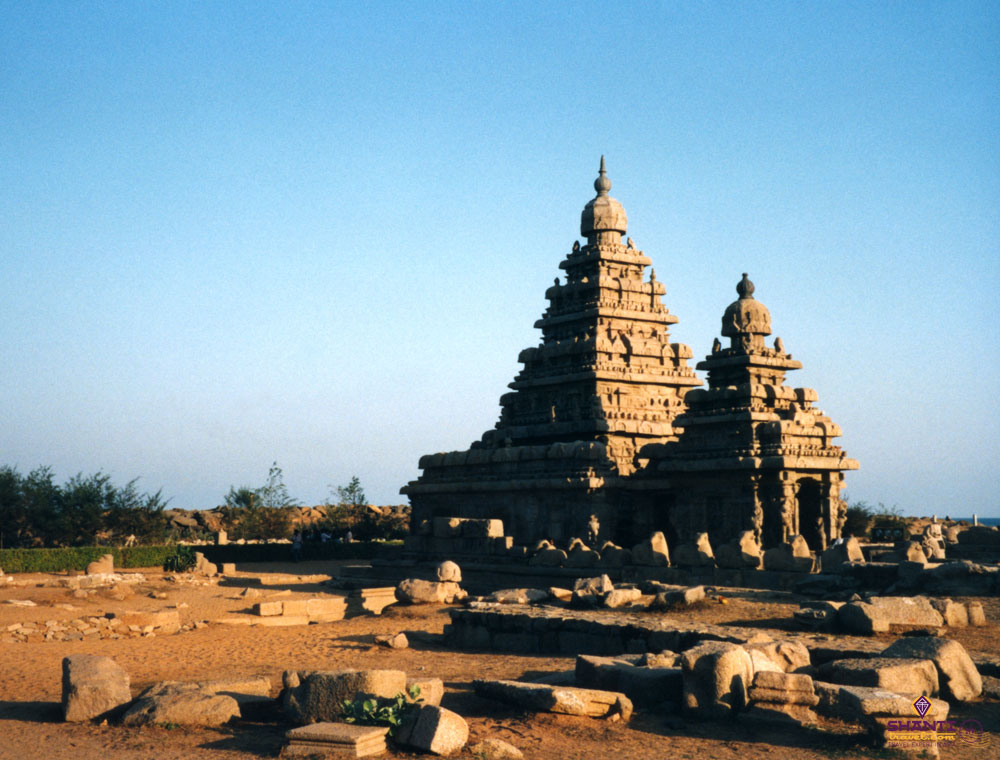 On of the most renowned tourist places near Chennai, Mahabalipuram is a temple town also known as Mamallapuram. It is located about a one hour drive to the south of Chennai. Its most famous attraction is the Shore Temple, standing tall at the water’s edge. A strong, cool sea breeze sweeps over the temple, lending a very pleasant quality to the experience. The small town is also known for the five Rathas, or monolithic stone chariot-shaped temples dedicated to various deities. Another architectural wonder is “Arjuna’s Penance”, a stone sculpture depicting scenes from the Hindu epic Mahabharata. The Mamallapuram Dance Festival is organized here every year between December and January. Mahabalipuram is one place near Chennai that is a real crowd-puller and on the list of every traveller to South India. 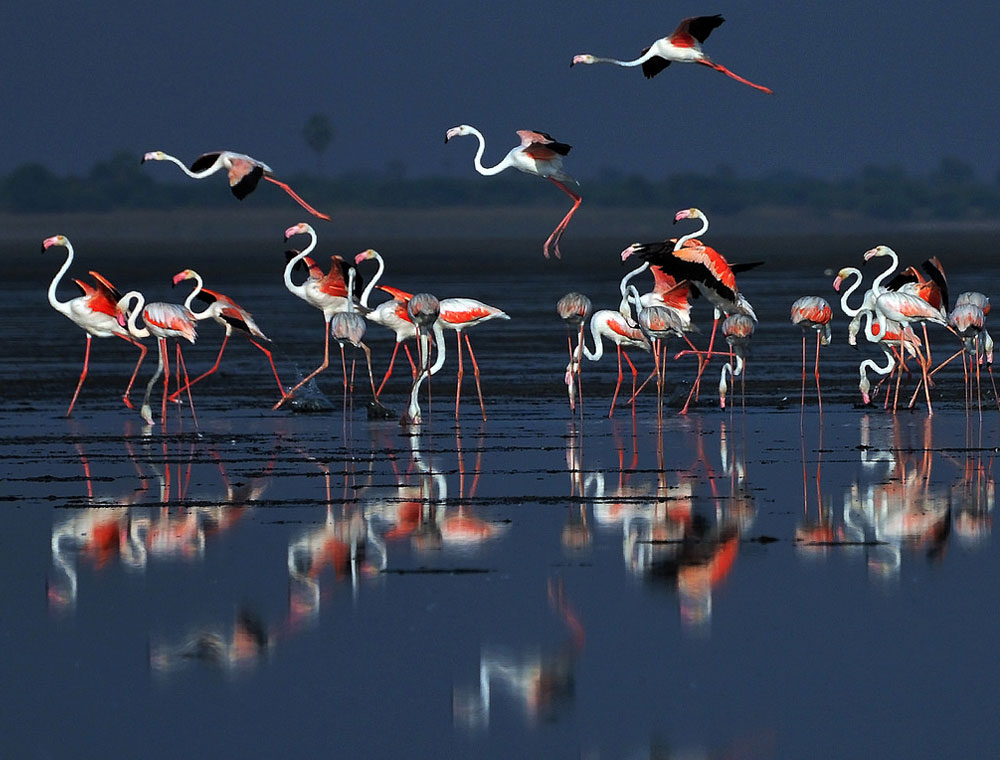 About 60 km to the north of Chennai is the peaceful Pulicat lake surrounded by a town and a bird sanctuary. The lake has the distinction of being the second largest salt water lagoon in India. With a length of 60 km and a breadth ranging between 200 m and 17.5 km, the lake is literally enormous! About 16% of it falls within Tamil Nadu while the rest is in Andhra Pradesh. The cooler months from October to March see thousands of migratory birds descending upon the Pulicat Lake bird sanctuary. The marshy land around the lake is particularly thronged by flamingos, painting the area a beautiful pink. The best time to watch these birds in action is mid-December, when the annual Flamingo Festival is organised by the Tamil Nadu government. Other birds to be spotted include ducks, herons, painted storks, and cranes. A 17th century Dutch colony, the township retains a lot of colonial buildings. The lighthouse across the lake, a Dutch cemetery, a smattering of churches, and the 10th century Chola temple of Chintamani Eswarar are the most popular attractions in and around Pulicat. 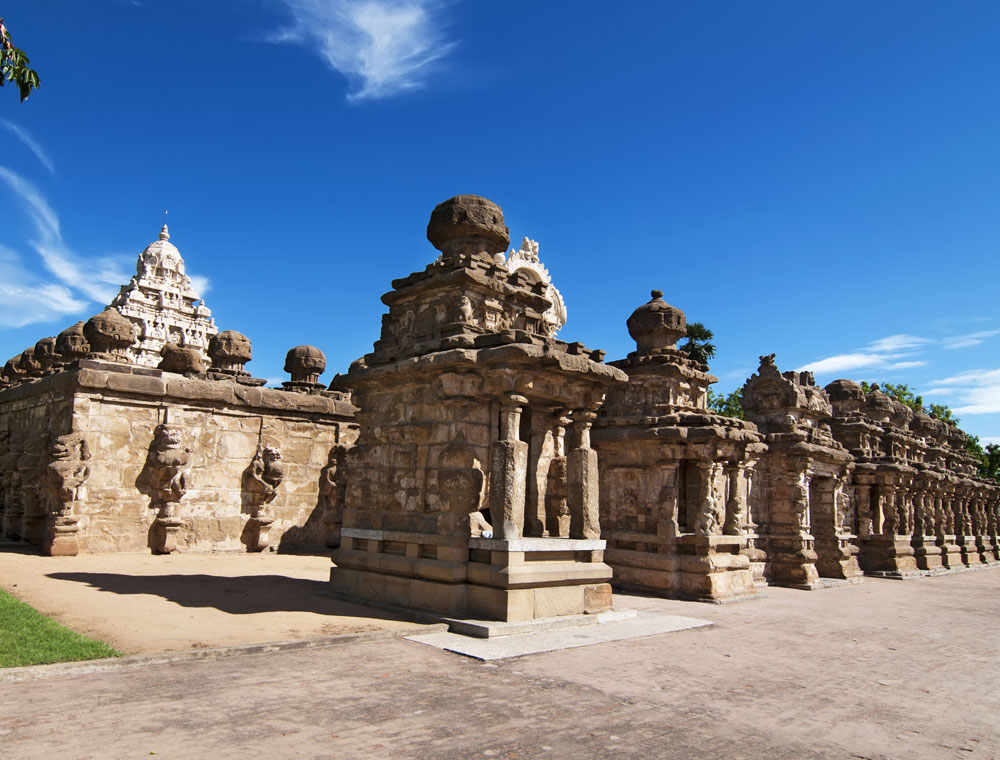 Most people know Kanchipuram as the source of the best silk sarees in India. But that isn’t its only claim to fame. Historically referred to as the “land of a thousand temples”, Kanchipuram is one of the most visited tourist places near Chennai. Of the 1000 temples, only about a hundred still remain, most of them dedicated to Lord Shiva or Vishnu. Kanchipuram was once the capital of the great Pallava dynasty of South India. It was also subsequently ruled by kings from the Chola and Vijaynagara kingdoms as well as the Mughals and the British. Each of these added new elements of design to the existing architecture, forming a unique blend over the centuries. The oldest temple in the city, Kailasanath Temple, was built in the 7th century but is surprisingly well-preserved. Kanchipuram also has a great repository of ancient sculptures, each of which is treat to behold. 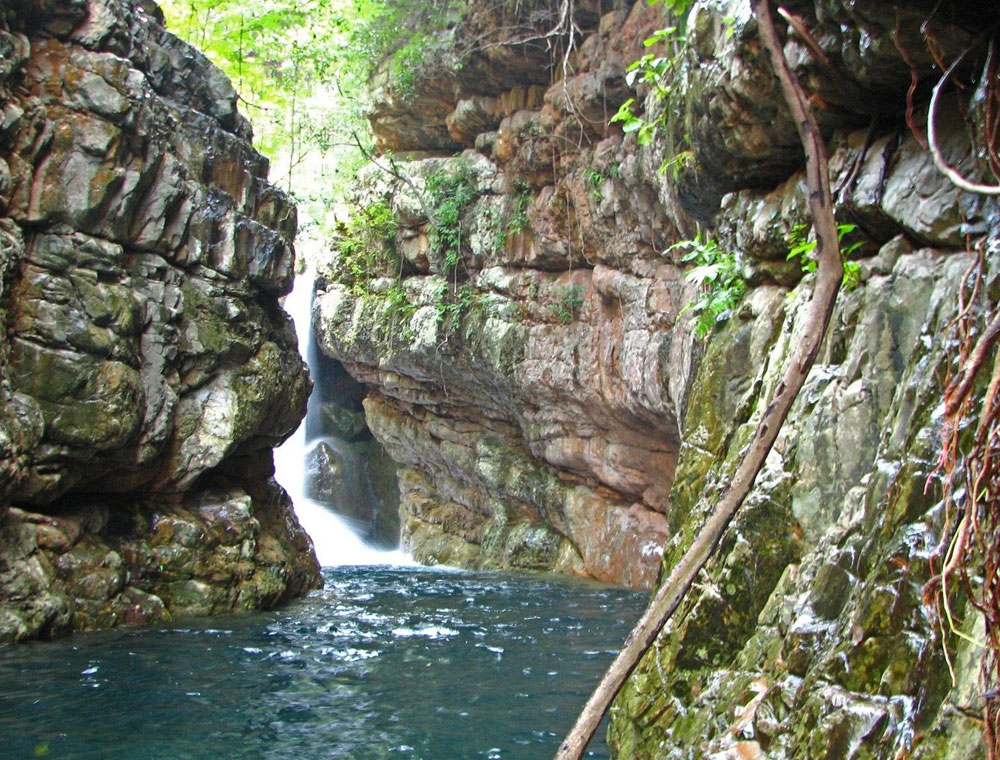 Tirupati is an important pilgrimage town for the devout Hindus of India and the world. The city is located in Andhra Pradesh, over 130 km from Chennai. The name however comes from Tamil. It was coined by the Tamil Vaishnava saint Ramanujacharya, who founded the city of Tirupati. In addition to a number of beautiful temples, Tirupati has a lot to see and do. The Tirumala Hills just outside the city are the second oldest rock mountains in the world. On the 7th peak of Tirumala stands the world renowned Sri Venkateswara Temple. Also known as the Balaji Temple, this is the richest temple in the entire world. It is also known to be the second most frequented holy place in the world after the Vatican. The hilly region constitutes the Sri Venkateswara National Park. You can spot many species of animals at the Deer Park, or trek to the stunning 270 feet high Talakona Falls. The spell-binding workmanship and grandeur of the temples and a plethora of tourist places make Tirupati one of the best places near Chennai for travellers. 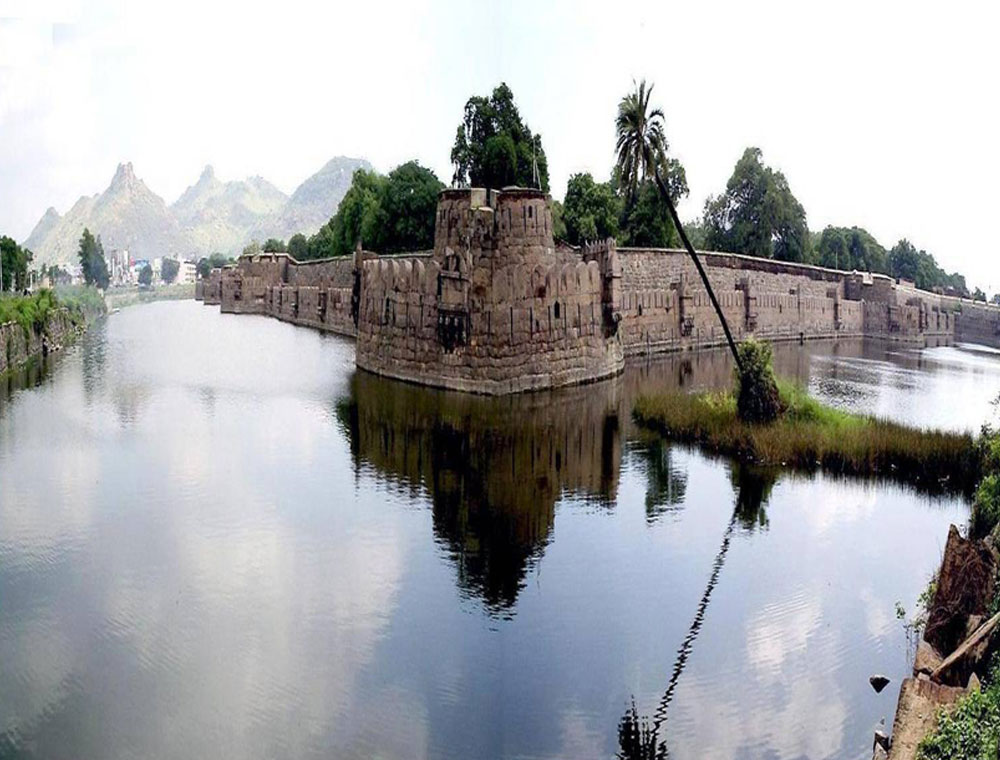 A small city on the banks of river Palar, Vellore has a stellar past that precedes its mention. One of the most historical tourist places near Chennai, Vellore literally means “City of Spears”. And indeed, it was once a battlefield, with several wars having been fought on its soil. Its most famous attraction, the Vellore fort is constructed entirely of granite blocks. It was built in the 16th century by the powerful Vijaynagara kings. The fort, surrounded by gigantic moats and ramparts, still maintains its imposing proportions. It is known to have held the last king of Sri Lanka, as also Tipu Sultan’s family, as prisoners during the British rule. Within the fort complex are also the Jalakandeswarar Temple, a mosque, and a church. The Vainu Bappu Observatory in Vellore, nestled amid 100 acres of forest, houses the largest telescope in Asia. There is a small hill station called Yelagiri within the city too. Be it adventure sports, mountain treks, or nature walks, you can do it all here. You can also visit Delhi Gate for a generous helping of history. 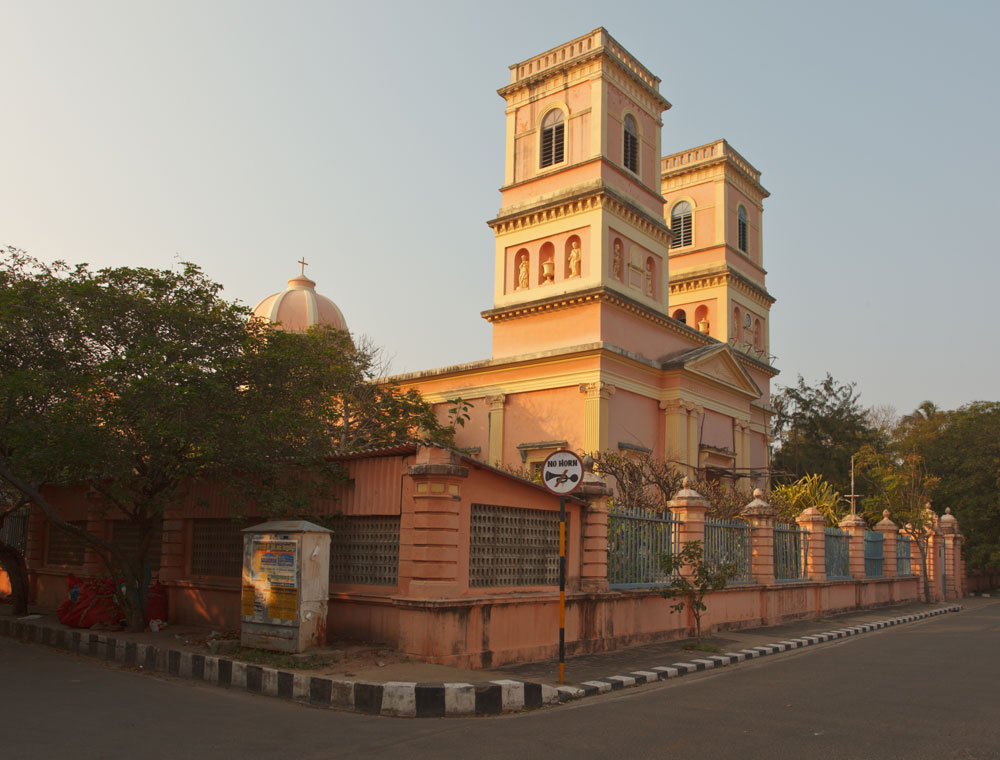 Stamped with an indelible mark of French architecture, Pondicherry is a town with pretty beaches and a spiritual air. Located about 163 km from Chennai, the town is planned in typical French style with streets perpendicular to each other and houses divided into sectors. Pondicherry is particularly famous for Auroville, a small experiential township dedicated to human unity and spirituality. It was built by a French woman called “The Mother” on the vision of the Tamil saint Sri Aurobindo. You could also indulge in a rejuvenating stay at the Sri Aurobindo Ashram nearby. Attend cultural evenings and gain a new perspective on life through meditation. Walk along the boulevards and marvel at the well-preserved colonial villas in the French Quarter of the city. The city also has some of the most pristine beaches found in any of the tourist places near Chennai.

During your visit to Tamil Nadu, make sure to visit one of these wonderful tourist places near Chennai. The discovery of the natural and cultural bounty of South India is utterly incomplete without these.