Shanti Travel > Jewels of Sulawesi – The Toraja in Indonesia 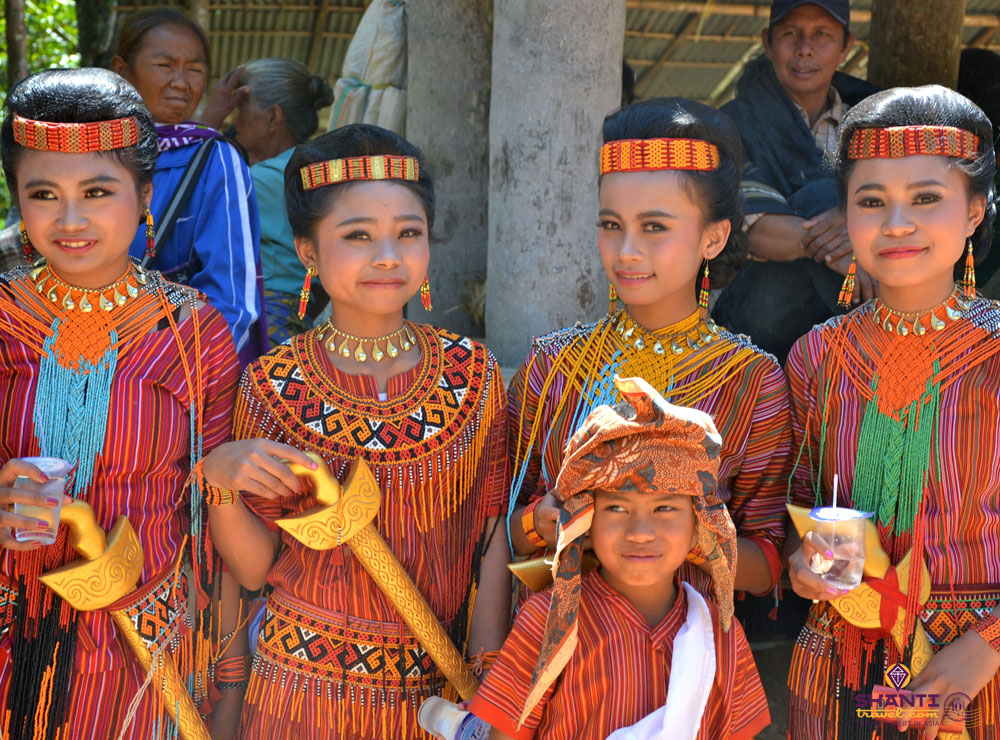 One thing I absolutely love about Indonesia is that one always keeps coming across new and unknown islands hidden away from the general public. Although with over a dozen thousand islands, it would take extensive study and research for anyone to know all of them. It so happened that when I announced my plan to travel to Sulawesi for 10 days, my friends and family didn’t really seem to understand where I was going. But it never occurred to me to blame them! Despite its status as the 12th largest island in the world, Sulawesi is not as well known as her sister islands: Bali, Java, Lombok, Flores etc.

That is perhaps because the island has two names: Célèbes (commonly used as ‘Celebes’) and Sulawesi. Or maybe because it is divided into ‘Tanas’ or smaller countries according to the ethnic groups living there: Tana Bugis to the South, Tana Toraja between the South and the Centre, and Tana Minahasa in the North.

In 10 days, I barely had enough time to visit the South of Sulawesi. I went from Makassar to the Toraja through the beaches of Bira and the Tempe Lake. But let me take up one thing at a time. First on the list – the Tana Toraja.

What does the Toraja mean?

Toraja, which comes from the Buginese “to ri aya” would mean “above from the people” to mean both that the Toraja live in the North compared to the kingdom of Makassar and also that they are a people of the mountains. Yet the Toraja are originally fishermen who fled the widespread Islamization in the plains and found refuge in the mountains.

The Toraja, an ethnic group preparing for their deaths

Tana Toraja is a province to the North of the South Sulawesi province. It is famous for its “Tongkonans” or traditional houses built in the shape of buffalo horns or boat hulls. It is also particularly well known for the Toraja and their special funeral rites. The Toraja people spend their lives preparing their tombs or hanging graves, tau-tau (a kind of mortuary effigies of jackfruit wood representing the deceased), and not to forget, buffaloes and pigs to sacrifice during the ceremony. But all this costs a fortune! So it is not uncommon for families to embalm their dead and wait for a few years to gather enough savings to perform the funeral rites. 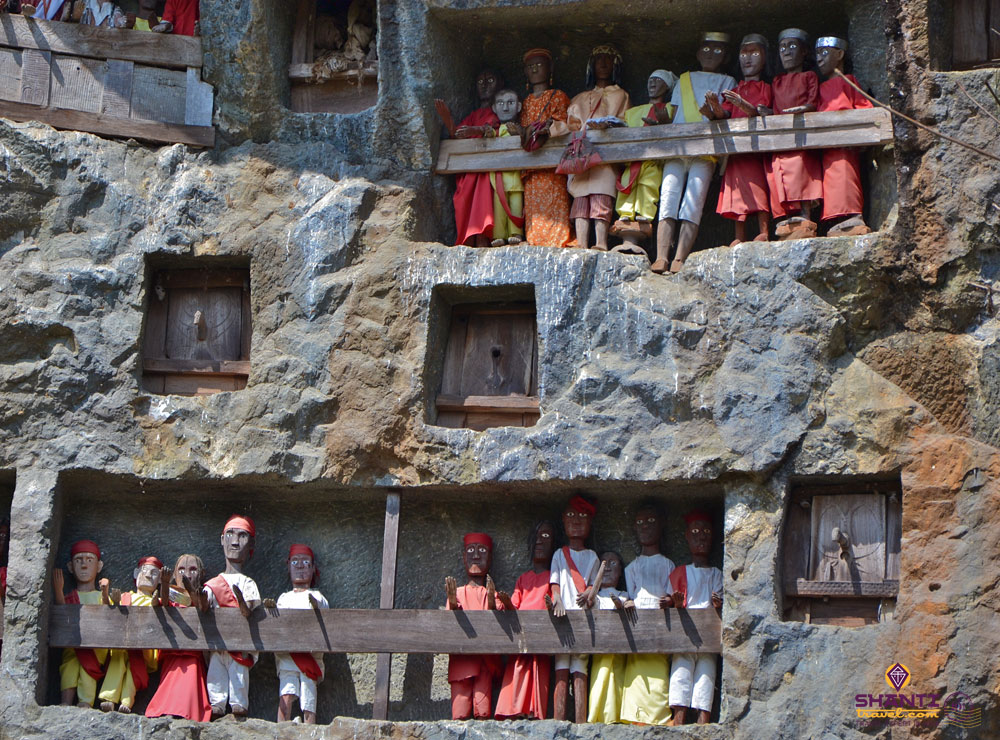 Religion is often separate from funeral ceremonies. Thus whether one is a Christian or belongs to the Toraja, a Muslim or a follower of the Aluk To Dolo animist religion recognized by the Indonesian government, funeral rites will always be specific to the village of origin of the deceased.

For example, if you are from Lemo, you will have your tau-tau hung from a rock within a kind of stone balcony, while in Londa, your grave will be directly suspended. Working a lifetime to finance one’s funeral and tomb might appear morbid to our Western eyes, but it’s really far from it. People gather in circles and sing prayers wearing costumes and colorful beads. The commemoration is actually quite festive and party-like!

My first experience of attending a funeral ceremony in Tana Toraja

I was fortunate enough to witness the first steps of a funeral ceremony being held in the honour of a nobleman. The number of people attending, and therefore the number of pigs and buffaloes sacrificed, depends upon the caste of the deceased.

A Toraja funeral is a far cry from a typical western funeral. Be careful, therefore; it is important to follow a guide in order not to commit blunders. Even from a distance, you can not miss the happenings. The place looks like a marketplace with all the cattle. Indeed, every family that arrives brings at least a pig, if not several buffaloes. And you have to go to the register so that the state can collect its taxes and your gifts can be carefully noted down.

Then a master of ceremonies announces your family, your background, and also whether the deceased’s family has already participated in one of your family’s funerals. For indeed within the Toraja, nothing is forgotten. The codes and rites are complex. But to simplify: all donations are recorded in a register. If a family attends a funeral of another family and brings a gift (pigs, buffalo, etc), the second family will attend the next funeral in the first family and bring along a gift of equal or higher value, thus returning the favour. 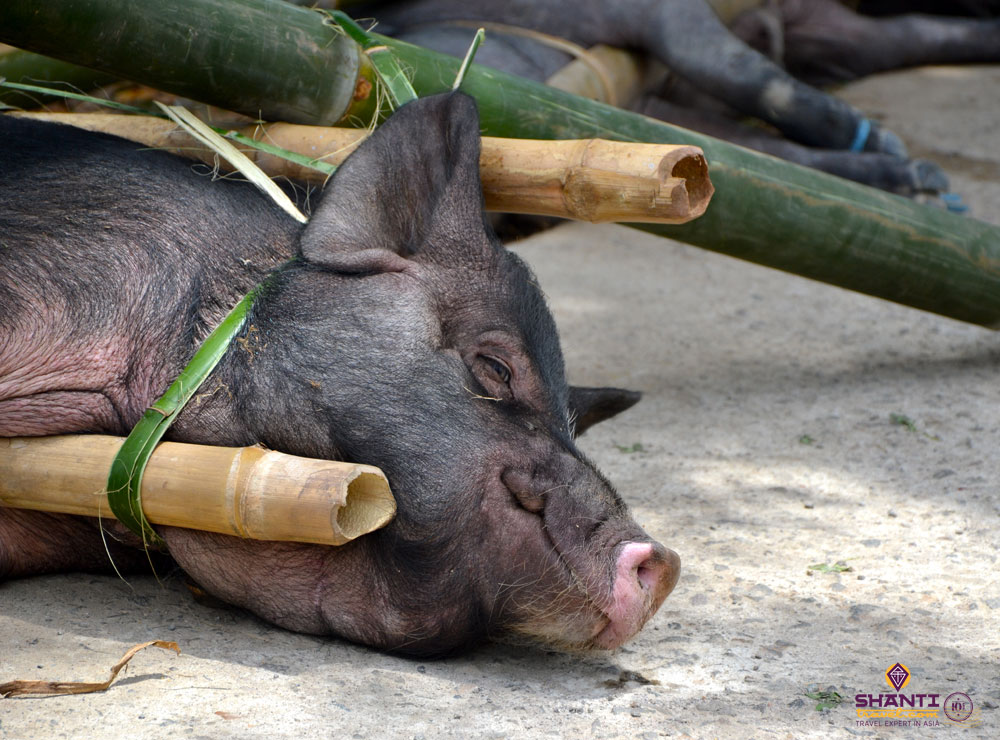 I watch buffaloes and pigs move to the rhythm of the families who visit their appointed tongkonans. Every family has a space of its own, nearer or farther to the sacrifices and prayer circles according to their relative importance.

Year in and year out, I have attended the sacrifices of buffaloes, and enough is enough for me. You are free to watch the sacrifice or choose not to. For the more sensitive, beware! I instead walk into the main square and choose to further my interest in architecture. Next to the entrance and the animal sacrifices, behind the main family’s tongkonan, kitchens and smaller surrounding tongkonans have been set up temporarily. These will be kept for the 3-4 days of the ceremony. 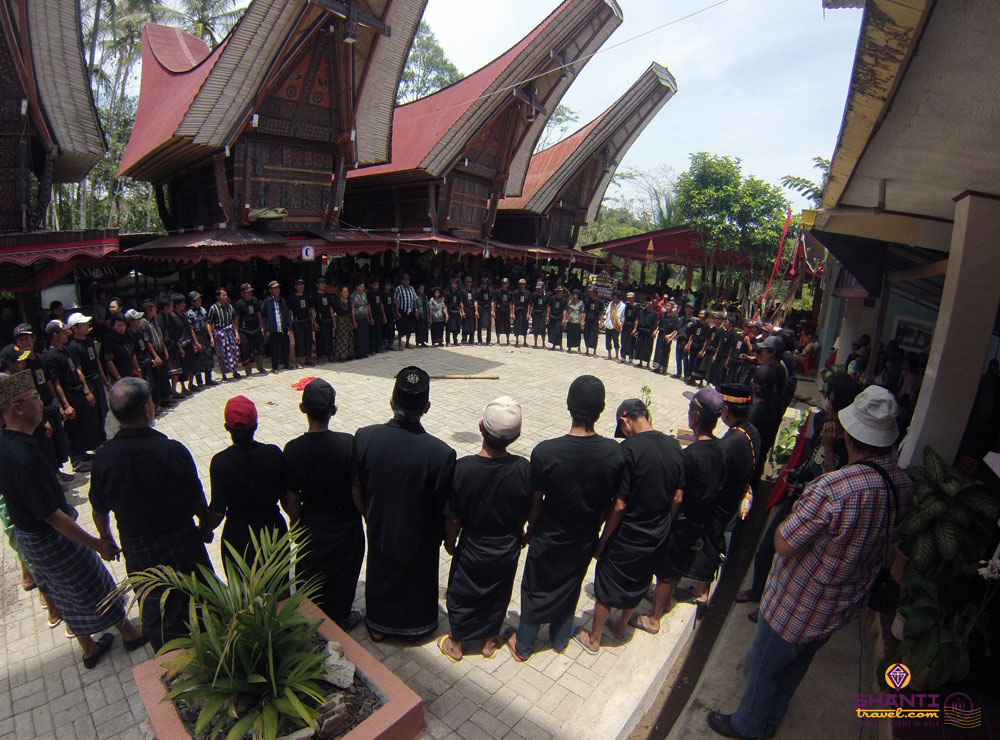 Then begins the prayer circle. Families dressed in black and girls clad in costumes and pearls of all colours take turns at forming a prayer circle, where song and dance mingle into a rising crescendo. A true moment of emotion!

Cigarettes for the dead

In Tana Toraja one discovers some peculiarities that are almost indescribable. While visiting the different villages you will surely see hats, cigarettes, bottles of all kinds, and other trash lying around. But no, the Toraja do not have a glaring problem of garbage collection. They leave at the graves items that the deceased might need in the afterlife. You will notice that most of the time the bottles are already empty, the village children and teenagers often drinking them up after school. But as long as the offerings remain at the grave of the deceased, it is no cause for concern; they can be shared with the children. 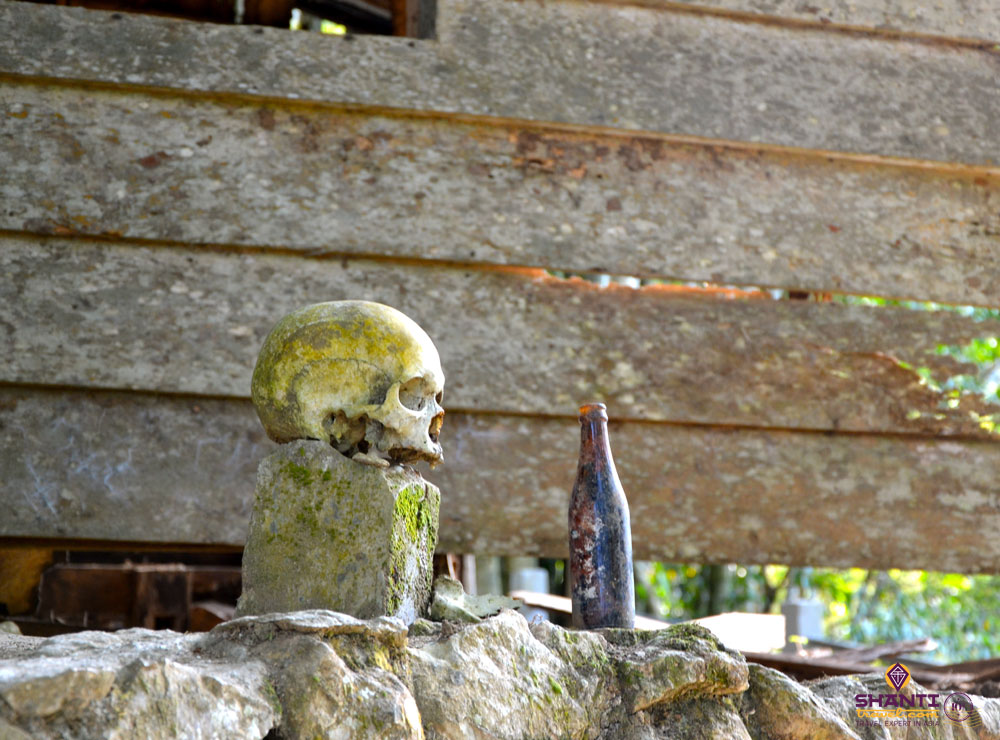 If you say ‘bye-bye’ to children, you will see them instantly break out into laughter. Also, you can just call them ‘little pigs’ in Toraja.

Long journeys that are worth making

My biggest worry before leaving was primarily the 8 hours journey from Makassar to Rantepao. But the stops on the way – visiting Buginese villages with houses in blue, pink, green etc, lunch by the sea, and all the anecdotes shared by Elvis, my Toraja guide (whose name does not do justice to his origins) – made the ride quite bearable.

A few hours later, I saw my very first tongkonans and some huge rocks. On a detour to the next mountain road, I noticed buffaloes quietly grazing beside a rice field. Here I understood why the Buginese people must have immigrated from more arid countries to the freshness of the mountains of the Toraja countries. This road trip made me enjoy traveling the country like never before.

Prefer a native guide in Tana Toraja; he will give you the best advice and easily get you into the funeral ceremonies. With Elvis, I even attended a sort of local housewarming that would otherwise have been very difficult to find.

If you can, go in September-October or May-June. Spending three nights in Rantepao, you have a 95% chance of attending a funeral of the Toraja. At the same time you’ll also successfully avoid the crowds and tour groups that come for the major ceremonies of July and August.

Whether for an hour or a day, hiking is the most rewarding method to go from one village to another. Distances and walking difficulties are adjustable. But you get the benefit of sharing a real moment with the Toraja people and enjoying the lush countryside if you walk. 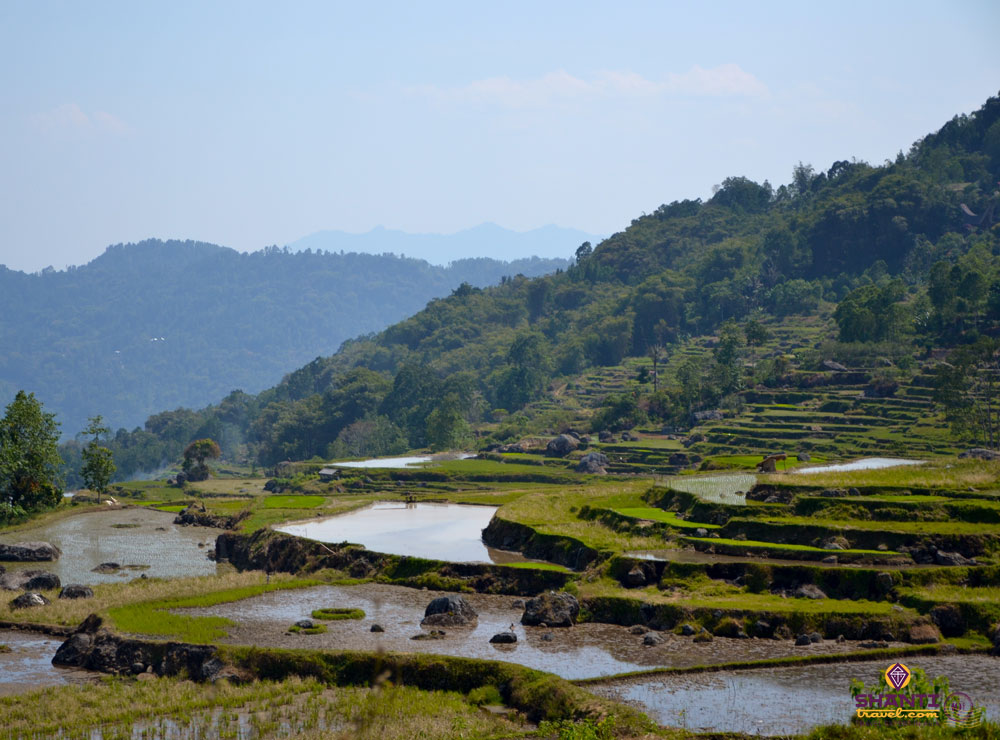 Once you visit, you’ll understand why the Tana Toraja is an unmissable part of South Sulawesi. The funeral ceremonies carry on throughout the year, along with breathtaking scenery and a favoured playground for lovers of architecture and photography.

But we should not reduce the entire South Sulawesi only to Tana Toraja. The beaches of Bira, its shipyards, and a walk along Lake Tempe at sunset are also worth experiencing.

Feel free to take a look at our programs in Sulawesi: